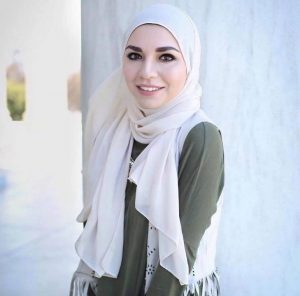 Isra Chaker is a civil rights activist, campaigns and advocacy expert, and public speaker. She serves as the Refugee, Migration and Protection Campaign Lead at one of the leading international NGOs in the world, Oxfam; where she uses her campaigns expertise in managing this campaign that advocates for vulnerable people such as refugees, asylum seekers, temporary protected status (TPS) holders; and opposes discriminatory policies such as the Muslim Bans. Being personally impacted by the Muslim Ban and not being able to reunite with her extended family in Syria, Isra is passionate in her work for reuniting families and advocating for vulnerable people. Recently, she was a featured speaker at the national #FamiliesBelongTogether March in Washington, DC to over 40,000 people. One of her infamous projects that went viral in 2017 was bringing refugees to President Trump’s childhood home in Queens, New York to share their experiences and their “American Dream”. She has been interviewed and featured on Democracy Now with Amy Goodman, NowThis, AJ+, ABC News, Al Jazeera, CNN, the Associated Press, VICE News, the Washington Post, etc. She is an appointed Public Advocate for the United Nations Relief and Works Agency USA (UNRWA USA) for her invaluable contributions in raising awareness and funds for their projects supporting refugee assistance. In addition, Isra has consulted with major networks and shows such as Netflix and Grey’s Anatomy on the development of Muslim and Arab-American characters to ensure an authentic and accurate portrayal of the narrative.